Phoenix Racing and HHC Motorsport claimed a win each in today’s GT4 European Series rounds at the Brands Hatch Grand Prix circuit. The #5 Audi R8 LMS GT4 won the opening race on Sunday morning, with the #55 Ginetta G55 GT4 taking victory in the second race. Schwede Motorsport won the Pro-Am class in both races, Autorlando was successful in the Am class. 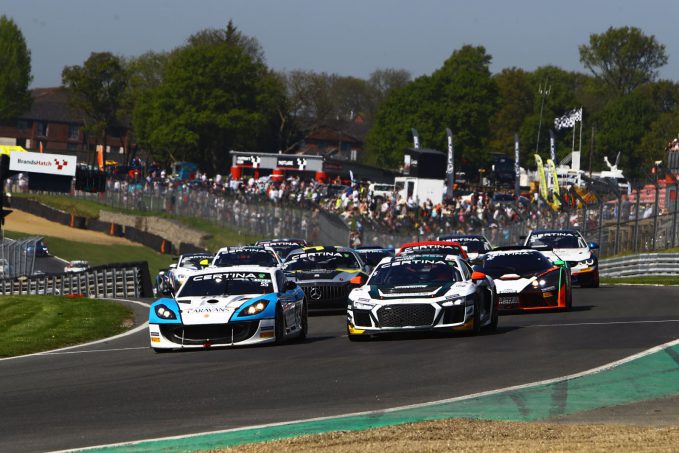 PHOENIX RACING WINS RED-FLAGGED OPENING RACE
Milan Dontje and Nicolaj Moller Madsen won an eventful first race of the GT4 European Series at Brands Hatch. The race was red flagged with 12 minutes left on the clock, after the #10 Equipe Verschuur McLaren 570S GT4 slammed into the barriers following contact with the #22 True Racing KTM X-Bow GT4. By then the race had already been neutralized twice before by the safety car.

The #55 HHC Motorsport Ginetta G55 GT4 was the first to cross the line when the red flags were waved, but the British team’s mandatory pit stop was too short, which cost Will Tregurtha and Stuart Middleton the race win and eventually saw them coming home in 15th place overall.

Equipe Verschuur driver Ricardo van der Ende and the Brands Hatch marshal that was on the post where the McLaren crashed were uninjured in the accident.

HHC MOTORSPORT BOUNCES BACK TO WIN RACE 2
After the disappointing end to race one, HHC Motorsport drivers Will Tregurtha and Stuart Middleton bounced back to win the second race of the Brands Hatch weekend.

The #55 Ginetta G55 GT4 started from the lead, but Tregurtha saw the #31 Selleslagh Racing Team Mercedes-AMG GT4 pass him on lap 5 and, struggling with the tires, eventually lost a couple more places.

HHC Motorsport made no mistake during the pit stop and Middleton returned to the track, behind the Selleslagh Mercedes. On lap 21, shortly after the end of the only safety car phase of race 2, Middleton passed the#1 MDM Motorsport BMW M4 GT4 of Simon Knap and Max Koebolt and eventually finished the race 7.798s clear of them.

Marcus Paverud and Ivan Pareras claimed third in Silver in the #2 Leipert Motorsport, ahead of the #31 Mercedes of Ward Sluys and Bas Schouten. Phoenix Racing’s Milan Dontje and Nicolaj Moller Madsen recovered to fifth place, having started from 16th on the grid.

DOUBLE WIN FOR SCHWEDE MOTORSPORT IN PRO-AM
Schwede Motorsport their third and fourth win of the season at Brands Hatch, which came as an unexpected surprise for the German squad and its drivers Phillip Bethke and Marc Basseng.

Racing One driver Markus Lungstrass and RN Vision STS driver Miguel Cristovao led the class until the pit window opened, with the field behind the safety car. Both drivers stayed out and only came in when the race was restarted.

The pit window regulations for Pro-Am resulted in the cars dropping down the overall standings. This handed the lead to the #3 Phoenix Racing Audi R8 LMS GT4 of Gosia Rdest and Cedric Freiburghaus.

The German team, however, stopped too short and after crossing the line in first place, they were given a 21-second time penalty. This handed the win to the Bethke and Basseng. Racing One’s Patrick Zamparini and Csaba Mor finished in second place, 0.795s behind the Porsche. The #6 Phoenix Racing Audi of Jörg Viebahn and John-Louis Jasper inherited third place.

In race two Academy Motorsport’s Matt Nicoll-Jones impressed during the first part. The British driver started from eighth on the grid, managed to move into second place on lap 7 and took the lead right before the pit window opened.

The safety car being deployed during the pit window meant the #60 Aston Martin Vantage dropped down the order and it was the Schwede Motorsport Porsche that took the lead.

Bethke was able to keep everyone behind and after 36 laps he finished almost four seconds clear of the #4 Phoenix Racing Audi of Helmut Rödig and Christopher Zöchling. Luiz Floss and Jamie Vandenbalck claimed third in class in the #38 3Y Technology BMW M4 GT4. 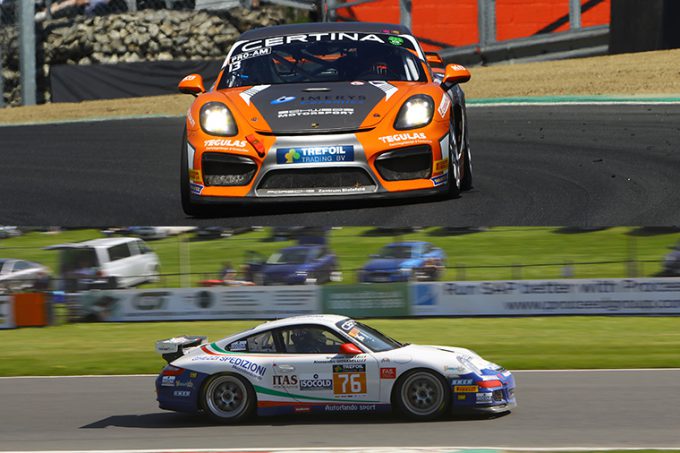 AUTORLANDO SPORT WINS BOTH RACES AT BRANDS HATCH
The #76 Autorlando Sport Porsche 911 GT4 of Giuseppe Ghezzi and Alessandro Giovanelli won the Am class in both races at the Brands Hatch track. A welcome result after the crash in Zolder last month.

In the first race of the day, Giovanelli and Ghezzi were in 11th place overall when the red flags came out. The Italian squad had a bit of luck as the #222 TFT Racing Porsche of Niki Leutwiler lost time after contact, but after three safety car phases the #76 Porsche had the lead and was still in first place when the race was stopped.

Leutwiler eventually finished second in class, with the #88 Team GT McLaren 570S GT4 of Felix von der Laden and Christian Danner taking third, after the #30 Selleslagh Racing Team Mercedes-AMG GT4 was given a 25-second penalty for a pit stop infringement.

In race two Leutwiler crashed out of the race from the lead, ending the Swiss drivers chances of a victory in Britain. Leutwiler’s accident handed the lead to the Autorlando Sport drivers and with both Ghezzi and Giovanelli not making a mistake, Orlando Redolfi’s team claimed its second win of the weekend.

Nicolaj Moller Madsen, #5 Phoenix Racing Audi R8 LMS GT4: “I really think we had a good car today and Milan did a brilliant job at the start to pass Kofler. We could fight with the Ginetta and everyone is on the same level. I got the car, did one lap and closed the gap to the Ginetta and I was sure I could pass him, but then we had the safety car. We deserved it today. We kind of lost the win in Zolder and now we got one back.”

Milan Dontje, #5 Phoenix Racing Audi R8 LMS GT4: “The start was quite good. On top speed we were better than the Ginetta and KTM, but they are better in the corners. We had a lot of safety cars, but still I had one chance with the KTM and I did it. I was happy with that one and I think I was also a bit quicker than the Ginetta. I think we did a perfect race, two wins this season, I am happy.”

Will Tregurtha, #55 HHC Motorsport Ginetta G55 GT4: “The start was a bit tricky, but it was a really good race at the front. The BMW and Mercedes were quick on the straight, but the Ginetta is so fast in the corners. We got the weight after qualifying and did get much green flag running, so we didn’t really know where the balance was. The rear tires were going off a bit earlier than the fronts, which made it quite difficult to drive. The pit stop helped the car calm down and Stuart went out and drove an amazing race, so I am over the moon.”

Stuart Middleton, #55 HHC Motorsport Ginetta G55 GT4: “I really enjoyed it. HHC and Will did everything absolutely perfect and we got out just in front of the BMW. It was a bit touch and go, but we got it. We managed to play a real good race throughout. We struggled with the rears and the balance, but we managed to hang on and make it last, which was key to this race. Very happy with the result, good fun making my way through the pack. Unlucky in the first race, but apart from that, I can’t not be happy.”

Marc Basseng, #13 Schwede Motorsport Porsche Cayman GT4 CS MR: “This is absolutely unbelievable. I was not expecting this from Brands Hatch as the track doesn’t suit our car. But we made no mistakes, that was our goal. We made a really fast pit stop and there we caught some cars in the class. Philipp did an awesome job as a gentleman with the pressure  from behind and I am proud of my new team. Everything is running perfect at the moment.”

Phillip Bethke, #13 Schwede Motorsport Porsche Cayman GT4 CS MR: “It was a real race and it feels amazing. Four races, four times on the podium, three times a win and a second place. It is great to work together with Marc Basseng. What else can I say, it is awesome.”

Alessandro Giovanelli, #76 Autorlando Sport Porsche 911 GT4: “This weekend was fantastic. Race 2 was the final result of a good adjustment of the car. Beppe did a good job, the start was difficult with cars zig-zagging, so I think we all thought a bit more this second race. We had luck [in race 1], because we finished under safety car and then the red flag, so we didn’t have a lot of battles. But important is to arrive at the finish with the car in perfect condition.”