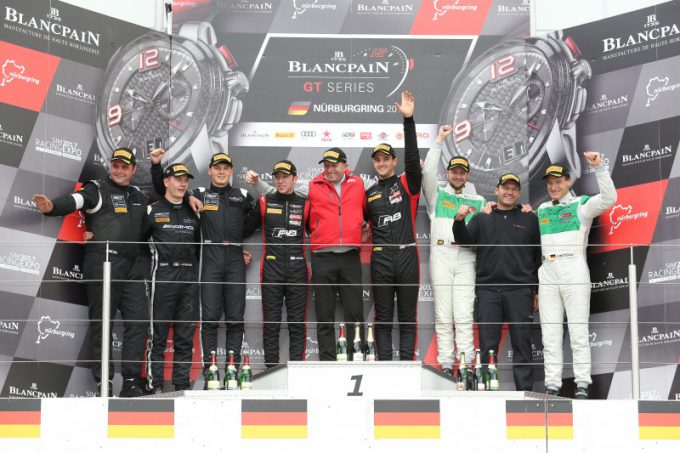 Buhk-Perera vs. Vanthoor-Fässler. After Saturday’s Qualifying Race everybody was convinced that the outcome of the 2017 Blancpain GT Series Sprint Cup would be decided by the duel between these two Mercedes-AMG and Audi duos. Franck Perera (#84 Mercedes-AMG Team HTP Motorsport) took the lead from the start, with Marcel Fässler (#5 Belgian Audi Club Team WRT R8) in third. After the second-placed Bentley of Maxime Soulet disappeared from the front (due to a drive-through penalty after pushing the #19 Grasser Racing Team Lamborghini off the track), the expected confrontation started to take shape. Whoever would win this race, would become the 2017 Sprint Cup winner.

After a safety car intervention Fässler was able to close the gap towards leader Perera, and thanks to a superfast pitstop – and a less than perfect one in the Mercedes-AMG camp – the Audi-duo took the virtual lead of the race. But that driver change was also the moment when everything started to go pear-shaped for the title favourites. When accelerating after the pitstop, one of the airhoses became entangled around the rear wing of Vanthoor’s Audi. The mechanic holding the hose fell into the working lane holding the wheel gun, which is an infringement of the rules.

Before the stewards could make a decision on the incident, Maxi Buhk had to park his Mercedes-AMG with damage to the left front. When shortly after that Vanthoor was penalised with a drive-through for the pitstop incident, the stakes of the duel between Markus Winkelhock (#2 Belgian Audi Club Team WRT R8) and Robin Frijns (#17 Team WRT Audi) suddenly became a lot higher. The drivers that were in fifth and fourth in the standings before the start of the final main race of the season now could become the 2017 Sprint Cup champions. 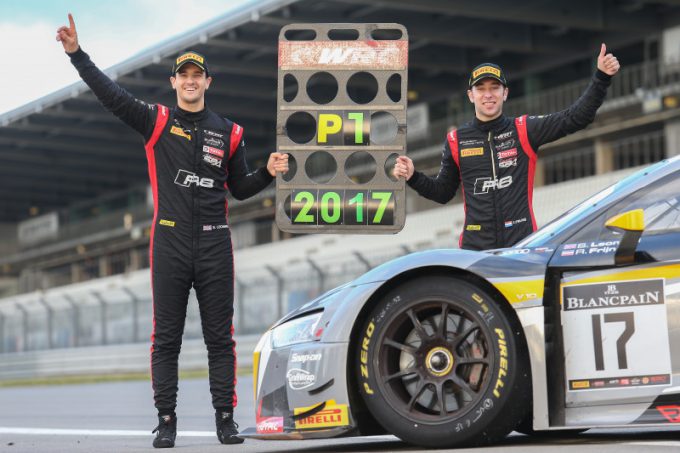 For the fifth consecutive year the Sprint Cup teams’ title has gone to Belgian Audi Club Team WRT, beating sister squad Team WRT. GRT Grasser Racing Team, claiming the points of third thanks to another excellent race of Andrea Caldarelli and Ezequiel Perez-Companc in the #19 Lamborghini, finishes in third.

In the Pro-Am Cup Daniel Keilwitz and Alexander Mattschull dominated the weekend at the wheel of their #333 Rinaldi Racing Ferrari. The pairing took their fourth main race win of the season, deservingly claiming the 2017 Sprint Pro-Am Cup. Rinaldi Racing beats fellow Ferrari-team Kessel Racing in the Sprint teams’ standings. The chances are that in two weeks’ time Mattschull can celebrate the overall Blancpain GT Series Pro-Am Cup title as well, for now only his teammate Daniel Keilwitz could beat him.

In the Silver Cup the freshly crowned champions Fabian Schiller and Jules Szymkowiak (#85 HTP Motorsport Mercedes-AMG) received a five place grid penalty after an infringement during warm-up, but that did not hinder the German-Dutch youngsters in producing another impressive race, ending up just outside the top five, in sixth overall. They obviously claimed another Silver Cup win, their fourth of the season. And for the third time this season Stephen Earle and David Perel (#888 Kessel Racing Ferrari) enjoyed their race to the win in the Am Cup.

The final round of the 2017 Blancpain GT Series is the three-hour endurance race in Barcelona, in two weeks’ time.

Robin Frijns: “I think I realized that I was up for the title halfway through my stint. Markus was leading and then I knew it was about the championship. It is always quite stressful when you’re battling against your teammates. This is one of the most stressful titles I think, not really being in a position to fight for the championship and then eventually we were battling for the championship. It was more stressful because I usually never fight for a title against a teammate. It was not easier or harder, just a different kind of emotion within the team. I hope we will still be friends.” 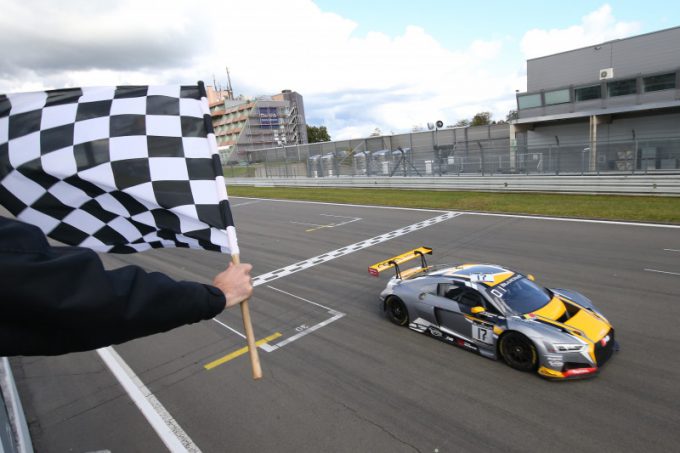 Stuart Leonard: “I am speechless. This will take a couple of weeks to sink in. Those last ten minutes of the race were nerve-wracking. It’s been a perfect season and I have to thank the whole team and especially Robin for this. Without them it would not have been possible. I don’t know where I go from here to be honest. But let us celebrate this title first.”

Markus Winkelhock: ”I did not really expect an attack from Robin. There was a misunderstanding on the radio to not attack each other and as he was overtaking I was not defending like I would normally do when it is about a championship. But being second is also a nice result and we can be happy about the season. Robin was definitely faster but if I would have known that I’m fighting for the championship I would have defended the overtaking much harder. ”

Ezequiel Perez Companc: “Today I was much quicker than yesterday and I’m quite pleased with the weekend – a double podium is amazing. I’m really happy for the team.”

Jules Szymkowiak: “Of course I’m as happy as I can be. We’re getting better, we have the potential, we have the speed, but we weren’t able to show it. So, finishing sixth and winning the Silver Cup does not really satisfy me to be honest. But again, we have a great team, we had a super pit stop and a fast driver change.”

Alexander Mattschull: “I was slightly nervous, because I was starting right in the middle of the field and I knew there were people behind me who were likely to push to the front. I tried to stay safe, I tried to stay in my position and do my race. Thank you to Daniel who drove really careful and clever. It’s a nice championship and a big championship to win. It was a good challenge for us.”

Daniel Keilwitz: “There is no such thing as an easy race. Especially a race in which you have the pressure of a possible championship win. Alex did a great job in the first stint, and the team gave us a perfect car, all weekend long. We only had to race, and now we are the new champions. Really happy with this.”

Stephen Earle: “I like the sprint races, the competition in the Blancpain GT Series is very, very high and I had a great team mate and I learned a lot. It’s great fun.”