With a splendid pass for the lead on lap 8, Anthony Kumpen (#24 PK Carsport Chevrolet SS) won a hard fought duel with Alon Day (#54 CAAL Racing Chevrolet SS) to win the last round of the NASCAR Whelen Euro Series regular season and close a hugely successful first edition of the American Fan Fest at the Hockenheimring.

After a stellar performance and massive celebration in Victory Lane, high-fiving his team and the countless fans, the 2-time Champ said, “What a great race!  My awesome PK Carsport team once again gave me a fantastic car.  It was really good on the long run.  I had to take care of the tires for the first few laps and then the car came-in and I was able to start putting the pressure on.  I had a great run on Alon, he made a small mistake that opened the door so I made my move.  He chose the inside lane, I wheeled my car to the outside and we had a great NASCAR side-by-side battle for a bit, but I was able to make a clean pass and take the checkered flag for the win.”  Regarding the Championship point standings, Kumpen said, “this was a good win for the standings, this is a very competitive Series and there are a lot of great teams and drivers,   every point is important. The last race finale is a long way off and anything can happen.”

With the Israeli starting from the pole and keeping the lead in turn 1 in front of Kumpen, the race immediately appeared to be matter between the two title contenders, who gained some ground on a big group of drivers fighting for third led by Salvador Tineo Arroyo (#54 CAAL Racing Chevrolet SS). 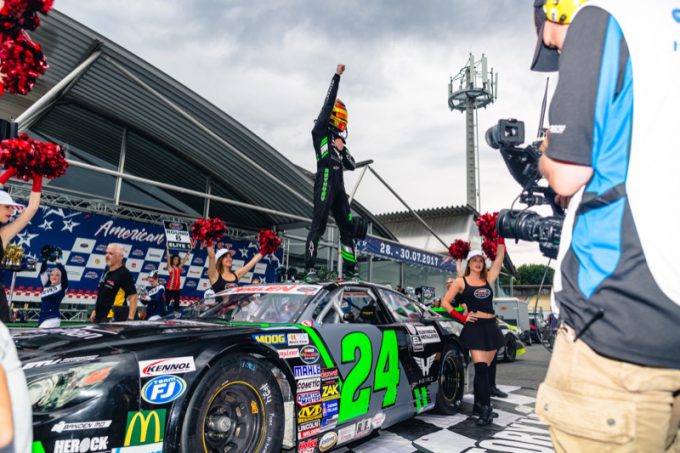 Day and Kumpen ran bumper to bumper until a perfectly orchestrated maneuver by the two-time champion and a slight mistake by the CAAL Racing driver between turn two and three gave Kumpen the opportunity he was waiting for. While Day went for a brief off track excursion, Kumpen took the lead and then defended it against Day’s return to win by .498 seconds.

The battle for third went to Frederic Gabillon (#3 Tepac RDV Compétition Ford Mustang) thanks to last lap pass on Salvador Tineo Arroyo (#54 CAAL Racing Chevrolet SS), who missed the podium by one spot once again but won the Junior Trophy. Christophe Bouchut rebounded from yesterday’s disappointment with the fifth place under the checkered flag. 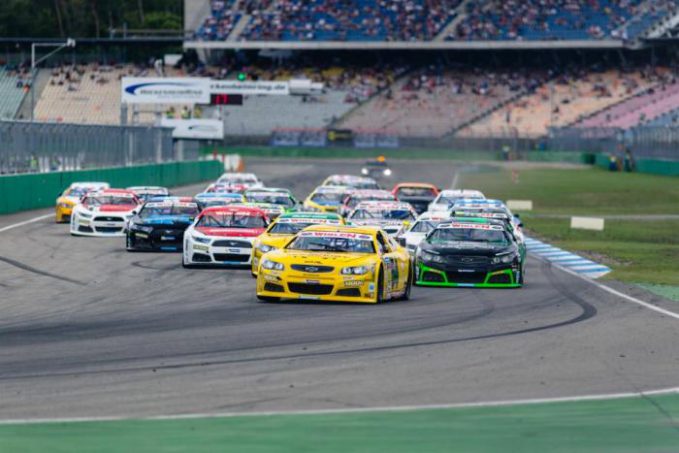 Marconi De Abreu (#47 RDV Compétition Ford Mustang) and Patrick Simon (#70 Mishumotors Chevrolet SS) put up a spectacular duel for the Challenger Trophy that ended with door-to-door dash to the checkered flag won by the Brazilian in 13th place.

After the summer break the NASCAR Whelen Euro Series will head to Italy for the Semi Finals with a brand new event at the Autodromo di Franciacorta on September 16-17. Garcia will lead enter the most crucial part of the NWES season leading Kumpen by 8 points and Day by 21.