The GT4 European Series Northern Cup is all set for the season finale at the Nürburgring. With the Pro-AM and AM championships still wide open, two fascinating races on the 5.148 km Grand Prix circuit are expected this weekend. Five drivers can still win the Pro-AM title and four are still battling for the AM title. 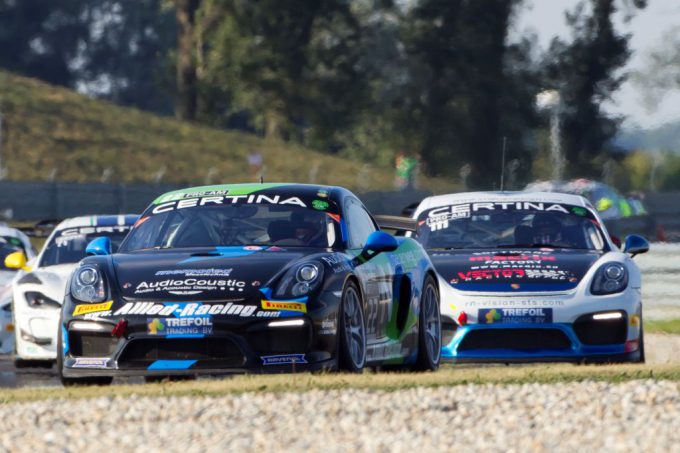 In the Pro-AM title fight RN Vision STS drivers Razvan Umbrarescu and Gabriele Piana currently hold a three-point advantage over Allied-Racing’s Jan Kasperlik, with Luc Braams and Duncan Huisman five points behind. Piana, however, will miss the final round as he has other commitments. Umbrarescu will share his Porsche with German driver Hendrik Still instead.

Umbrarescu and Piana won four races so far this season, while Kasperlik won the opening race at Zandvoort last month. Braams and Huisman won twice this season, but only scored eight points last time out. They hope to bounce back at the Nürburgring. With 25 points to play for per race, it is likely that the Pro-AM title will only be decided in the final race on Sunday morning.

Meanwhile, Autorlando Sport driver Giuseppe Ghezzi holds the lead in the AM class. The Italian is currently on 145 points, 15 points ahead of Scuderia Villorba Corse drivers Romy Dall’Antonia and Giuseppe Fascicolo. Their teammate Manuela Gostner is on 125 points and Autorlando Sport driver Manuele Mengozzi on 105. As Mengozzi shares his Porsche 997 GT4 with Ghezzi, he is unable to win the title, but could still make it into the top three.

Ricardo van der Ende and Max Koebolt clinched the Silver Cup at Zandvoort, but the Ekris Motorsport drivers will not relax in Germany. The Dutch drivers aims to win the overall GT4 European Series title as well and will therefore do everything to get the best possible result in the season finale of the GT4 European Series Northern Cup, before shifting their focus on the two Southern Cup rounds.

A grand total of 38 cars has been entered for the final round of the 2017 season, including a number of new and returning entries. Schwede Motorsport will make its series debut at their home track with two Porsche Cayman CS MR GT4s and 2012 FIA GT1 World Champion Marc Basseng is one of the team’s drivers. He joins team owner Phillip Bethke, while Dominik Schraml and Rudolf Schulte will race the second car.

CD Sport has drafted in Matthieu Cheruy and Kévin Bole-Besançon to race one of its Porsche Cayman CS MR GT4, with Benjamin Ricci and Morgan Moullin-Traffort in the second car. MOMO Megatron Team Partrax will make its second appearance in the series, as will Generation AMR SuperRacing with its Aston Martin Vantage GT4. 2016 GT4 European Series champions PROsport Performance is also set to return, having missed the Slovakia Ring and Zandvoort rounds.

*All times are local