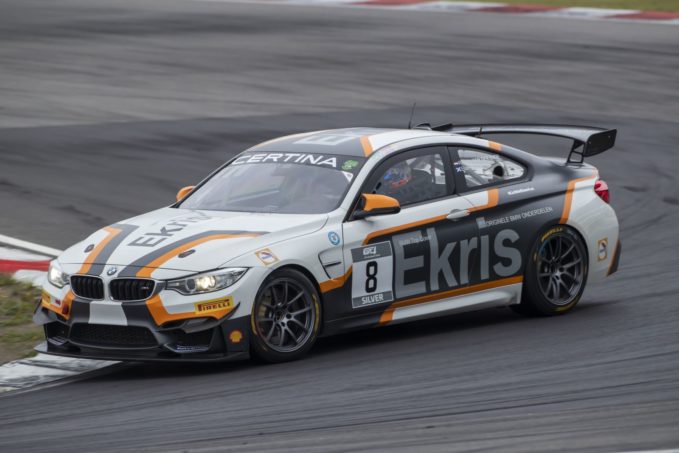 The last race of the season began with the #8 Ekris M4 GT4 of Van der Ende on pole position and the Dutchman held this advantage into the first corner, followed by Equipe Verschuur’s Benjamin Lessennes.

Van der Ende pulled away rapidly and by lap nine the gap between the Ekris and the Equipe Verschuur McLaren was already 7.5 seconds. Further behind, Alec Udell was in fifth, with Jan Kisiel ninth in class.

When the pit window opened after 25 minutes, Udell came in right away to hand over to Simon Knap, while the other Silver Cup title contenders stay out. Lessennes came in at the end of lap 15, with Van der Ende and Kisiel entering the pits right at the end of the pit window.

After the stops, Euan McKay held an 11.5-second lead over Akhil Rabindra, who had jumped the Equipe Verschuur McLaren out of the pits. However, the PROsport Performance driver was given a stop-and-go penalty for too short pit stop.

At the front, Euan McKay controlled the race and after 28 laps he crossed the line to take Ekris Motorsport’s first win of the season. Patric Niederhauser gave the #16 True Racing KTM its fourth podium finish of the season, with the Equipe Verschuur crew completing the Silver Cup podium.

Behind the #19 PROsport Performance Aston Martin and the #24 Valvoline – True Racing KTM, Knap crossed the line in sixth place, 1.171s clear of Koebolt. As a result, and similar to last year’s season finale at the Nürburgring, the MDM Motorsport and Leipert Motorsport pairings finished the season level on points, with Udell and Knap claiming the title by virtue of more wins.

In Pro-Am victory went to the RN Vision STS BMW of Gabriele Piana and Marius Zug. The Italian-German duo managed to keep the #22 Allied Racing Porsche of Nicolas Schöll and Jan Kasperlik behind during the 60-minute race. Luci Trefz and Marcus Paverud claimed yet another podium finish in the #2 Leipert Motorsport Mercedes, more than enough to clinch the 2019 Pro-Am title.

The Selleslagh Racing Team drivers swept the podium in the Am category, with Jean-Luc Behets and Johan Vannerum taking their fifth win in eight races this season. Bob Herber and Alessandro Giovanelli finished in second place, ahead of Angélique Detavernier and David Dermont. With a sixth place finish, Street Art Racing’s Clement Seyler and Pascal Bachmann secured the drivers’ title in the Am category.

Euan McKay, #8 Ekris Motorsport Ekris: “Really great. We showed how quick the Ekris car really is. It was nearly a perfect weekend. The team has put in so much work this year. Massive thanks to the Ekris team for giving me a great car. Great race.”

Marius Zug, #111 RN Vision STS BMW: “Every race where we didn’t make a mistake, we were the winners. Fifty points over the weekend, so we can be happy with our season-ending race.”

Gabriele Piana, #111 RN Vision STS BMW: “It is a bittersweet victory. This is the weekend that we could potentially have always had, as it is the performance we always showed.”

Jean-Luc Behets, #32 Selleslagh Racing Team Mercedes: “It was a bit tense at the end, as I couldn’t change gears. I had to reset the car, but I managed to keep a gap to the others and I didn’t have to push, so a top result!”

Johan Vannerum, #32 Selleslagh Racing Team Mercedes: “It all seemed to go perfect, but a couple of minutes before the end we had a gearbox scare. We managed to return to the track, two seconds clear of our sister car. It was a tough one, but I’m pleased with this one. A nice way to finish the season.”