The Ginetta Cars duo followed up a breakthrough maiden victory in the series on Sunday morning with a second victory in Race 2 in the afternoon. The #100 Ginetta G55 GT4 dominated both races at the 3.916 km Brands Hatch Grand Prix circuit. Tom Hibbert and Charlie Robertson started both races from pole position, set the fastest race laps and crossed the line in first place in Race 1 and Race 2, overcoming multiple safety car periods. 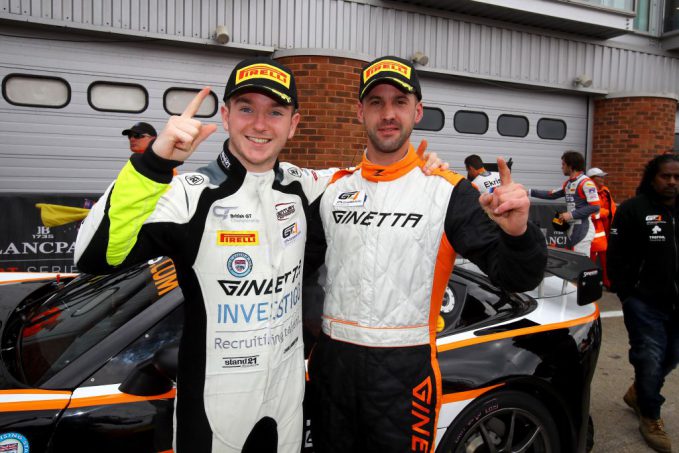 Debut victory for Robertson and Hibbert in Race 1
In Race 1 on Sunday morning Tom Hibbert and Charlie Robertson were unable to shake off the #8 Ekris Motorsport Ekris M4 GT4, as a result of three safety car periods. Two of them were caused by Academy Motorsport cars spinning off into the gravel, while the third was the result of the #11 Sofia Car Motorsport by BADI Sin Cars Sin R1 GT4 requiring recovery vehicles to retrieve the car.

Two out of two for Robertson and Hibbert in race 2
In some ways, Race 2 on Sunday afternoon was like a repeat of Race 1, with Tom Hibbert and Charlie Robertson beating Ricardo van der Ende and Max Koebolt. Like in Race 1 earlier, there were three safety car periods in the final race of the weekend.

The first safety car was the result of Allied-Racing drivers Timothy Stupple and Jamie Vandenbalck crashing into each other, causing severe damage to both cars. Spins for the #75 Autorlando Sport Porsche 911 GT4 and the #11 Sin R1 GT4 caused the second safety car, while the third was deployed after TM-Racing.org driver Daniel Rymes hit the barriers.

A late-race crash of the #222 TFT Porsche gave the race director no other option than to red flag the race. With just four minutes left on the clock, there was no time to recover the stricken car and restart the race. The #100 Ginetta G55 GT4 was declared as winner, with Ekris Motorsport claiming second place. Academy Motorsport drivers William Moore and Matt Nicoll-Jones got third place on count back after the red flag.